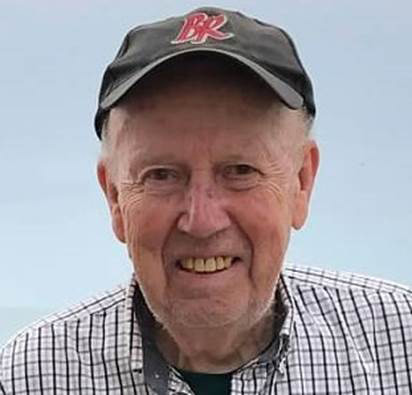 Joseph W. Lynch, 92, passed away suddenly and peacefully on August 21 while resting in his favorite chair after lunch at the Country House in Greenville, DE, where he had lived since 2014 with his wife, Joan McCarte Lynch (who predeceased him on Nov. 2, 2020). Happily, his dry sense of humor, love for his family, concern and care for others, gentlemanly nature, and inquisitive mind remained central to him throughout his days.

Born in Northeast Philly on June 20, 1930 to the late Joseph and Emma (Wagner) Lynch—who passed away when he was 9—he was athletic and entrepreneurial throughout his youth, playing basketball across the city and juggling multiple jobs ranging from greenhouse worker to soft pretzel street vendor. After graduating from Frankford High School in 1948, he majored in chemistry as a first-generation student at the Philadelphia College of Textiles & Science, commuting every day, playing basketball for two years, and graduating in 1952. He served two years in the Army and was stationed as a chemist and sergeant at the Army Chemical Corps at Edgewood (MD).

He then began his 40-year career in textile marketing at DuPont, married Joan, and began raising their family of three children in Wilmington. Famously frugal as a child of the Depression, he did notably splurge on two things: travel and the education of his children. Favorite family trips included Grenada, Bermuda, Jamaica, the Bahamas, Lewes, the Jersey Shore, and Norway. At the age of 50, he and his beloved Joan learned to SCUBA dive, which launched them on a 20-year love affair of underwater exploration in exotic locations. Some of their 547 lifetime dives together (he was an inveterate record-keeper, too!) took place in the waters of Palau, Yap, Fiji, Mexico, Bonaire, Tortola and Belize, to name just a few.

Joe also picked up a “retirement job”—a few months after retiring from DuPont—as a wine consultant at Total Wine in north Wilmington. He was the fledging company’s 14th employee and ended up working there several days a week for another 22 years before retiring—again!—at age 85. His role at Total Wine (now with 11,000+ employees) allowed him to pursue his love of wine, which was also reflected in his library of 3,500+ wine books collected, curated, and catalogued over a lifetime. His third and final “job” came as an unofficial ball-hawk at nearby Ed (Porky) Oliver Golf Club, where he shagged more than 8,000 golf balls (conservative estimate) over the next seven years, with the last haul of 24 balls obtained just four days before he passed.

Joe was an “early adopter” of several pastimes and endeavors. He began running for health in the 1960s (in low-top canvas Chuck Taylors, no less, and recorded every run over 40 years on graph paper – 1 page per year), long before the “craze” of the 70s. And before recycling was the norm, he encouraged his young children to collect and return old newspapers from neighbors—a practice that aligned with his belief that almost anything could be reused/re-purposed/recycled. As a family man, he also declined several promotions at DuPont—rather than climb the corporate ladder—to allow his family to stay in Wilmington and not be uprooted.

He enjoyed gardening; listening to jazz (especially Dave Brubeck) and “Fridays with Frank” [Sinatra]; taking photos (more than 13,000—conservative estimate, again) on trips and then labeling and putting on slide shows of those family travels; sharing meals—paired with the right (value) wines—with Joan and small groups of friends; tasting and judging wines with the “Purple Spots” wine-tasting group he formed in the 1970s; shuttling his kids to countless swim meets across the Northeast and attending all manner of grandkid activities; traveling with Joan, kids, and grandkids; and spending time outdoors marveling at the beauty of nature (while also looking down on occasion to scout for loose change).

When it came to the college choices of his children, he made it clear that they should look anywhere they wanted to go and could get in, and not worry about the cost—he would cover it. This led to the logos of Virginia Tech, Gettysburg, and Bucknell being prominently displayed on the rear window of the 1977 Pontiac Catalina Safari station wagon he proudly drove for 40 years; grad schools and grandkid college stickers were added to the window over time. He was an active and proud alumnus himself of Textile (now Jefferson University, née Philadelphia U.), serving on several committees and supporting the school in multiple ways.

Joe is survived by his three children, Nancy (Mike) Peper, Joe (Kelly), and Kathy; three grandchildren (Elizabeth, Carolyn and Will Peper); and the children (Tamara, Careen) of his late cousin, Clare, for whom he served as legal guardian in his 20s. He was predeceased by a stepsister, Margey, and half-sister, Judy. His kids and grandkids—who called him “X” their entire lives based upon his generic signature on a “welcome baby” card sent before he’d decided on a grandpa nickname—consider it a blessing that they were able to spend quality time with him often over his final few years, and that he cherished each and every visit and phone call.

The family would like to thank the wonderful caregivers of Country House for their kindness, compassion, and life-affirming care in the nursing wing these last 2 ½ years.

A Celebration of Life “open house” gathering for both Joe and Joan (who passed away during COVID) will be held Oct. 22 from 2-5 p.m. at the Inn at Montchanin Village (528 Montchanin Road, 19710).

Joe and Joan’s ashes will be buried at sea, together, via the Living Reef Memorial Project, which encases the remains in materials that will help form coral reefs. In lieu of flowers, the family encourages you to open a nice bottle of wine (preferably from Total Wine) and raise a glass to him. Donations to “Jefferson University/Fashion & Textiles Futures Center” in his memory are also welcome (mailing address is Jefferson Univ., Dept. 825434, P.O. Box 71331, Phil., PA 19176; online gifts can use “Other” under designations and indicate “Fashion & Textiles Futures Center.”