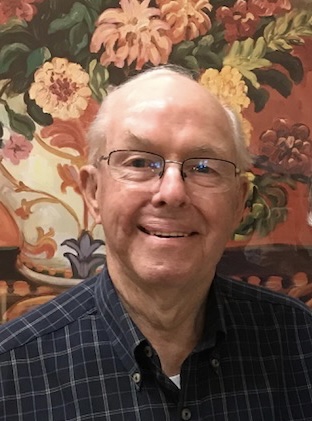 Ransom Jenks, the retired Director of Security at Williams College, who during his tenure tried reasonably successfully to temper and to redirect the rowdy spirits of his students, died peacefully in his sleep June 24. He had been successful enough in this endeavor so that some students named their group The Ransom Jenks Band. When he died, he was six weeks past his 90th birthday but 6 days shy of his 70th wedding anniversary, a landmark he had yearned to celebrate with his wife, Annette.

People knew Ransom more than anything for his nature, which was engaging, very funny, generous, faithful, and loving. He was a really good man, and this seemed to those who knew him even more important than whatever his accomplishments may have been. At Maris Grove, the community where he and his beloved wife spent the second half of their retirement, he met, chatted with, and got to know everybody from the high school wait staff to the administrators, as well as fellow veterans, woodworkers, pool players and aspiring pool sharks, gardeners, and any others he happened upon.

He particularly loved woodworking, learning at Maris Grove to turn bowls, make furniture, construct fine boxes, and devise “tacks shelters “ (long story). He liked, understood, cared about, and respected everyone he met. He and Annette volunteered to take charge of the terrace gardens; he would help others put their gardens to bed for the winter and rototill them in the spring, as well as offering advice at other times, but only when solicited. They would put out their surplus vegetables—tomatoes, peppers, onions, cucumbers, zucchini—to share with everyone. He was very witty and could engage in repartee; some of his jokes were perhaps a little racy, but never offensively so.

In Williamstown he had been a selectman. Later, two feet of heavy snow fell early one October, destroying huge numbers of trees because it stuck to their leaves; so many limbs and trees themselves were snapping that it sounded as if a gun battle was raging outside. He with his chainsaw volunteered to lead crews in clearing roads. He would be eager to help when friends or family encountered any difficulties. He and Annette organized “Camp Mema Poppa” (the names their grandchildren used for them) each summer for their beloved grandchildren; it included fishing, learning to use a rifle, archery with homemade bows, making and using slingshots, horseback riding, building forts in the woods, playing with water balloons, lots of being read to, underage driving lessons on gravel backroads, and visits to local places of interest, among other things. His grandchildren had a ball and still cherish those times. He took great interest in his children’s and grandchildren’s lives and enormous pride in their accomplishments, and was supportive of whatever they did. Ahead of his time, he taught his two daughters that they could do anything boys could do.

Ransom and Annette had met in 7th grade and became part of a pack of kids who hung out together before their first, thrilling kiss in 10th grade. At first when he was around his buddies and would call Annette on the telephone, he would say he was talking to “Mike” to cover his tracks. Neither one of them ever seriously dated anyone else. At one point when they were married a friend did report to Annette that Ransom had a red-headed girlfriend with whom he was brazenly riding around town in his pickup truck; the girlfriend turned out to be Josh, their Irish setter, sitting next to him on the front seat and leaning against him for stability.

In high school Ransom was a very good athlete despite being only 5’7” tall; he was on the football, basketball, and baseball teams. His classmates elected him president his senior year. After high school, during the Korean War, Ransom enlisted in the Air Force; Annette followed him to England, where they married at the Register Office in Newmarket the day after her arrival. There Ransom played shortstop for the Air Force team, which toured Europe. Later in life his passion for athletics was limited to being a frequently disappointed but still faithful Red Sox fan. Ransom and Annette were devoted to each other throughout their long marriage. In a quaint, affectionate, and respectful way, Ransom himself always called Annette Mrs. Jenks.

Ransom’s nature and accomplishments were all the more remarkable because of his hardscrabble early life. His parents were working class people who struggled in other, personal ways as well. These experiences left their mark but also strengthened his resolve. When he and Annette returned from England, he had only a high school education, and there were not many jobs available. He did whatever he could to help his family. At first he drove a truck delivering meat but then learned to be a journeyman meat cutter; at that time, grocery stores bought sides of animals that they butchered themselves. To the end of his life, he would recognize and savor a good cut of meat, but only if it was truly rare. His rare, not likely yours. (He also loved fried oysters.) He later started a side business helping others by dressing and butchering their deer during hunting season.

He became a food store inspector and a slaughter inspector and the town’s sealer of weights and measures. He learned to be an arborist, climbing, pruning, and felling trees by himself, never using a crane, once nearly dying when a tree fell in an unexpected way, landing on him. He was saved from being crushed only by fortuitously falling into a dip in the ground. He could recognize most trees by their bark. He learned to trap animals, mostly muskrats, fewer beaver, and rarely a precious mink. People still loved furs; there was no PETA. After shooting his first deer by himself when he was twelve, he continued to hunt deer for food for his family. Some people strongly oppose hunting nowadays, but Ransom hunted in a remarkably moral way: no jacking, no baiting, no driving, just he himself searching for deer. If he wounded a deer, he would track it however long it took until he found it. It was amazing to be with him in the woods; he could spot the ear of deer in a thicket a hundred feet away. He wanted to be successful, to do things well, but also to do them right.

He could be very excited about the natural world: seeing a fisher or a bobcat or a bear, or finding a surviving American chestnut tree on a mountain road, or simply watching the sun rise over the mountains across the valley from his home. He loved fishing, too; up until the time he died, he hoped to go fishing one more time, and in a brief delirious moment, he did.

He decided to attend the Massachusetts State Police Academy, where he was second in his class. He began to work as a policeman in Williamstown, but this was a modestly paid position in a small, rural town, and his job situation itself was complex and difficult. Working there did enable him to become the first ever of his family to attend college and obtain a degree. The position at Williams was a godsend to him. Williams was a place where he could earn a better living and, even more importantly, be treated with respect. At the start of every day, he would meet with the dean, who not only solicited but respected his opinions. His life became easier at that point.

He and Annette moved to Shaftsbury, Vermont, building their own home. Ransom did much of the finish carpentry, a skill he had learned from watching craftsmen at Williams. They lived there until moving to Maris Grove in Glen Mills, PA. Each of these moves was courageous: leaving the town where they had spent their entire lives, building a home on their own, then downsizing and leaving that area and all their friends for a retirement community near one of their children.

Ransom had many encounters with modern medicine, most to his benefit, some immensely so, and a couple even life-saving. Toward the end of his life, he made another courageous decision; he decided not to begin renal dialysis but to let nature take its course. He was happy with the life he had led, and he wanted to save his family, and himself, all that dialysis entails. He wanted to die peacefully at home, surrounded by his loved ones, which he did. Ransom left the world a better place for his presence in it.