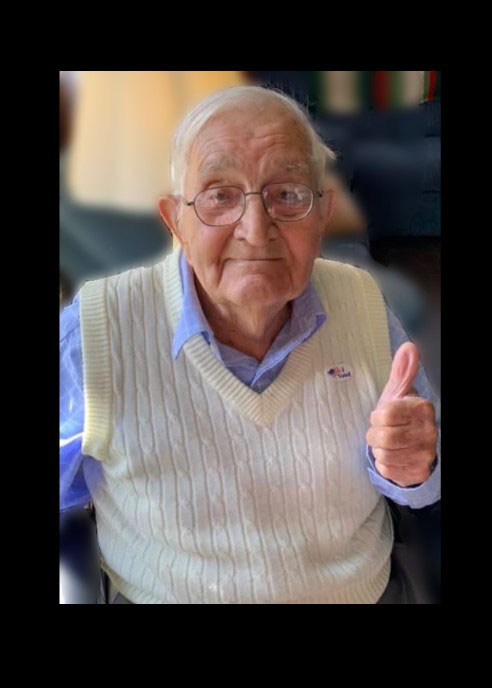 Edward S. Elrod (100) of New Castle, Delaware passed on June 2 at home. He will be remembered for his kindness, gentleness, and endless supply of excellent one-liners.

He was born on August 6, 1921, the son of John Montgomery “Gum” Elrod and Elizabeth “Lizzy” (Love) Elrod in McMinnville, Warren County, Tennessee.

Edward attended Dibrell High School and enlisted in the United States Coast Guard in 1942. He trained in New Orleans and Boston and then served as an Electrician’s Mate. He was stationed at Bethany Beach, Delaware, where his unit patrolled the beaches. He was later assigned to the USS Admiral Capps and made an Atlantic crossing to return Italian POWs home and bring back American GIs. While on a weekend pass to Wilmington, he met the future love of his life, Frances Jean Davis, in the candy shop where she was working. They were married in June of 1945 and settled in New Castle, Delaware, at the end of the war.

Edward worked for the Warner Cement Company of Wilmington, helping complete many of the building and bridge projects that improved life throughout Delaware. When the company moved to Philadelphia, he chose to work for DuPont construction in Delaware before taking on work with the United States Postal Service. In over two decades as a Postal Service driver, he earned a Million Mile Safe Driver Award as a before retiring from the USPS in 1988. He received numerous thanks and accolades for his performance at USPS from the offices and branches along his delivery route.

Edward and Frances were lifelong members of the Cedars (now Greenbank Road) Church of Christ, where Edward served as the Deacon responsible for maintenance of the building and grounds for over four decades.

Edward and Frances loved to travel together. During their travels, they went to all 50 states and visited hundreds of historical sites, monuments, and parks. They were also able to visit several European countries when their children were abroad. When not traveling, they enjoyed time with their family and friends and were frequent hosts for family gatherings and parties.

Edward was happy to support Frances in her love for glassware and collectibles, and even amassed an impressive collection of antique oil lamps of his own. They traveled to markets and sales together and enjoyed meeting and making new friends.

He was preceded in death by his beloved wife, Frances, his parents, John and Elizabeth, and his siblings, David, Nora Lee, Jessie, Lila, Mattie, Lloyd, Locey, and Dorothy.

A viewing will be held on Sunday, June 12, 2022 from 2:00-4:00 p.m. at the McCrery and Harra Funeral Home, 3710 Kirkwood Highway, Wilmington, DE 19808 where a service will follow on Monday June 13th at 11:30 a.m. officiated by Ed Greenwood of Greenbank Road Church of Christ. Interment will be at the Delaware Veterans Memorial Cemetery, 2465 Chesapeake City Road, Bear, DE 19701 at 1:00 PM. Pallbearers will be grandchildren Kirk, Shawn, James (Melsha), Alan, Mary, and Charlotte Elrod.

In lieu of flowers the family requests that donations may be made to Delaware Hospice. To send condolences visit: www.mccreryandharra.com.