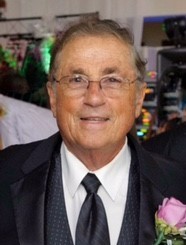 Dante Marini ran his final lap on May 18th, 2022. Dante was born 88 years ago in Wilmington, Delaware to parents who immigrated from San Marino, Italy. He was very proud of his Wilmington roots; he attended grade school at St. Elizabeth and high school at Salesianum (Class of 1952). He cultivated an early interest in farming as a young boy working alongside his father, growing flowers and produce on the Eisenmenger Estate in Arden, Delaware. He would travel to the King Street Market, sell their garden produce and tell his customers, “If you’re lucky enough to be Italian, you’re lucky enough.” He went on to attend the University of Delaware where his bachelor’s degree in Horticulture launched the start of his 42-year career with Stauffer and Zeneca as a product development specialist and agronomist bringing agricultural innovations to growers across the Northeast. He was a friend to all farmers, a leader among his peers, and a connoisseur of the best diners in Lancaster and New Jersey.

Dante always knew he wanted a big family and found the perfect partner in Beebe. Together for 63 years of marriage, Dante and Beebe raised 11 children. His love of farming and sales were a perfect match for the creation of Marini Produce and Christmas. This North Wilmington Produce and Christmas market was started over 60 years ago when his children were young to help fund their Catholic school education that was so important to his Christian values of faith, hard work and discipline. Dante remained an integral part of the family Christmas market as the resident overseer and lead arrangement maker.

Any discussion of Dante Marini’s life would be incomplete without mention of his passion for running and coaching. His own running career started at Salesianum and continued at the University of Delaware, but his greatest pride was in the legacy he created as a coach for over 60 years. One of his proudest roles was coaching his children and grandchildren. He shared his philosophy of hard work, simplicity and dedication as the coach of multiple CYM and high school teams. He was famous for his simple sayings:“ You’re right where you need to be,” “Hit light and float,” “Relax the arms,” “Roll with the punches and fight through the pain.” He has been instrumental in mentoring and motivating countless athletes and coaches in Delaware. Outside the track, he was also a passionate fan who loved to see his children and grandchildren succeed in all sports, including gymnastics, soccer, baseball, football, wrestling and volleyball.

Above all, Dante’s greatest joy was family. Nothing made him happier than being surrounded by his loved ones, especially at dinners leading prayers and giving legendary speeches filled with quotes and poems. His annual Christmas Eve Seven Fishes feast was always one for the books. He loved desserts (especially coconut cake) and birthday parties, always insisting “I’ve been to a lot of birthday parties, but this is the best one yet!” Dante Marini was the humble patriarch who remained constant in faith, steadfast in his work ethic, and dedicated to family above all else. He continued to pass on the value of what it meant to give back to others, fully and freely, without expecting anything in return. Dante was preceded in death by his son Joey and grandchildren Leslie and Ashley. His legacy of service to family and community lives on in his wife Beebe, his children Patti Allegretto (Dave), Denise Lougheed (Bill), Linda Olivere (Paul), Kate Wheeler (Jeff), Danny (Tracey), Jimmy (Jackie), Marianne Horgan (Mike), Theresa Kain (Kevin), Michael (Wendy), Angela Ryan (Sean), 27 grandchildren, one great-grandchild, his beloved cousin Nita, and one potbelly pig. We thank Dante for living life to the fullest and reminding us often, “You are only given one life, but if you live it right, once is enough.”