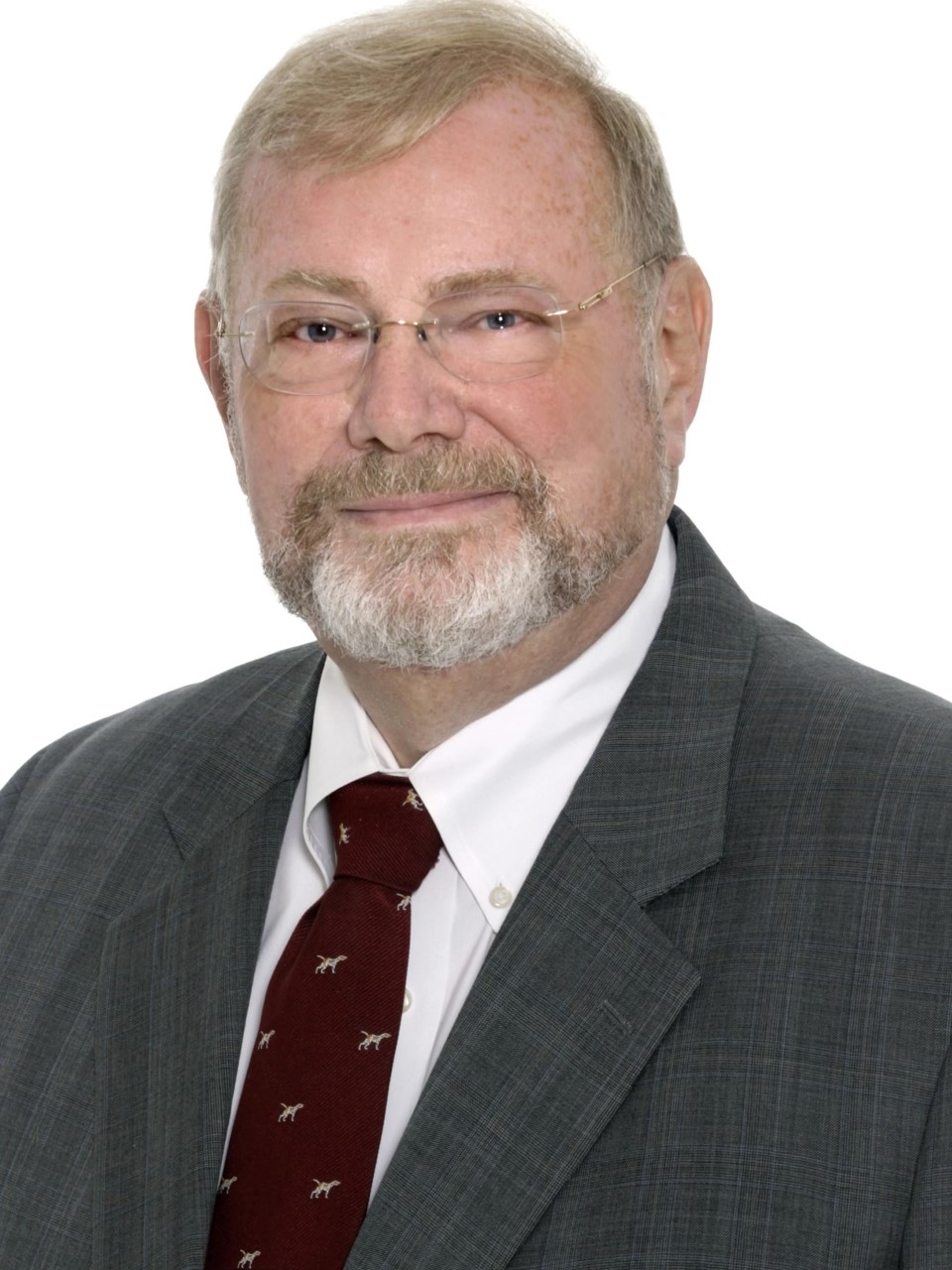 Richard Stephen Gebelein was born in Darby, Pennsylvania on June 8, 1946, to Walter C. Gebelein and Margaret E. Stratton of Longwood Estates, Pennsylvania. Raised in the Roman Catholic faith, Richard attended St. Joseph’s on the Brandywine for his early education. As an industrious young boy, Richard was an active apiarist and even published his own newspaper entitled “The Longwood Herald.” In later years, he would recount his successes and misadventures in bee keeping to the wonderment of his grandchildren. Richard attended Salesianum for High School and graduated class of 1964 with honors in mathematics, science, and religion. He was inducted into their Hall of Fame in 2017.

In 1967 at age 21, Richard received his Bachelor of Science in Mathematics from University of Pittsburgh and after graduating was elected the youngest Magistrate in the Commonwealth of Pennsylvania. Having switched gears for what would be his life’s work in law, Richard went on to receive his Juris Doctor from Villanova University Law School in 1970. The same year, Richard began working for the State of Delaware as a Law Clerk for the Honorable William Duffy in the Court of Chancery in Wilmington, DE. Richard was admitted to the Bar of the Delaware Supreme Court in November of 1971 and appointed as a Deputy Attorney General to the Delaware Department of Justice under Attorney General W. Laird Stabler, Jr. serving in that role for 3 years. His service to the people of Delaware continued when he was further appointed to be the State Solicitor (1974), Chief Deputy Public Defender (1975), and eventually elected Attorney General in 1978. In addition to working for the Department of Justice, Richard began a military career by joining the Delaware Army National Guard in 1979 as an Assistant Staff Judge Advocate of the Judge Advocate General’s Corps.

After serving as the State’s Attorney General, Richard was asked to serve as the State’s first Disciplinary Counsel tasked with working with the Delaware Supreme Court to enforce attorney’s rules of conduct, investigate, and prosecute matters related to ethical violations.

In 1984, Richard was appointed as a Superior Court Judge by then Governor Pierre S. DuPont IV. During his tenure with the Delaware Superior Court, Richard pursued various initiatives including serving as a member and later chair of Delaware’s Sentencing Accountability Commission where he supervised criminal justice research and championed criminal justice and sentencing reform based upon research results, e.g. advocating for repeal of mandatory minimum sentences, and establishment of evidenced-based sentencing alternatives to reserve prison space for serious violent offenders. In 1990, this led to the adoption of Delaware’s Truth in Sentencing Act, to which Richard contributed as an author. Additionally, this type of research led him to advocate for and oversee the establishment of the Superior Court Drug Court in 1993, with the goal of rehabilitation through addressing individual’s substance abuse issues which initially led them to entering the criminal justice system. This court model is a legacy which has been replicated or influenced similar specialized courts throughout other jurisdictions within the United States.

Richard became an expert in the impact and implementation of Drug Courts with his expertise leading him to testify before the United States Congress and be complimented in the United States Senate by the then Senator, now President of the United States, Joseph R. Biden in an exchange recorded in the hearing minutes as follows:

Senator Biden: But I know you know Judge Gebelein, Mr. Chairman. He has been here before. He has been a member and associate judge in the Superior Court of Delaware since 1984. Prior to that, he had a job similar to the one you had as a Federal prosecutor. He was our attorney with the State of Delaware.

He is a good card-carrying Republican, which I hope makes you like him a little more, but he also is—-

Senator Sessions: He did look like a nice fellow, I must admit.

Senator Biden: He is one hell of a guy. He has served as chairman of the Delaware Sentencing Accountability Commission since 1989. He is the founder of the Delaware Statewide drug court system–ours is Statewide–where he serves as drug court judge responsible for post-adjudicated offenders, and he is the founding member of the National Association of Drug Court Professionals. There is much more to say about him, except to suggest to you that this is a serious man who has taken his job incredibly seriously.

In 1993, Richard and likeminded court professionals throughout the United States, became the founding members of the National Association of Drug Court Professionals. Richard continued to serve that organization through various roles, including Vice Chair, until 2015. From 2001 to 2003, Richard severed as a Member of the Board of Directors for the National TASC (Treatment Alternatives to Street Crime) and went on to author Standards for Treatment Courts for the American Bar Association (2001). Richard also served as a member of various committees during his career including: the Delaware Sentencing Research and Evaluation Committee and the Delaware Violence Against Women Act Committee.

In 2004, as a Colonel and Staff Judge Advocate in the Delaware National Guard, Judge Gebelein was deployed to Kabul, Afghanistan, as the Rule of Law Officer supporting Operation Enduring Freedom. His role was to help put together the nation’s legal system where his days consisted of a series of meetings with Afghan officials and international experts working on the same mission. He gathered data on the legal system and prisons, helped draft laws and participated in judicial and legal training with the goal of changing the patchwork of existing laws which were a mixture from Afghanistan’s monarchy, the Soviet era and the rule of the Taliban, with the goals of humane treatment of prisoners and a fair and impartial court in which defendants were considered innocent until proven guilty. While deployed he also “adopted” a local Afghan village orphanage and school and working with folks at home, organized the donation of over $40,000 in school supplies, clothes, food items, and toys. Richard said that his perspective on law reform changed a

bit after the Khyer Khana school effort. That the important areas to address were often very simple or basic, like food or shelter, and that establishing the rule of law was necessary in furtherance of economic development. During his military career, Colonel Gebelein was awarded the Legion of Merit, the Bronze Star, Army Commendation Medal, Army Achievement Medal, Delaware Conspicuous Service Cross, and the Delaware National Guard Medal.

Upon his return from military deployment, Richard took an appointment as an International Judge on the State Court of Bosnia and Herzegovina, War Crimes and Economic Crime and Corruption Chambers presiding over several high-profile war and corruption cases and bringing his legal expertise to new settings. Richard said the most appealing part of the job was resolving disputes in ways that might not please everyone involved but was fair. He believed this approach was important because it helped reassure Bosnians that their reformed judicial system provided individuals with fair trials which did not reinforce the assumption that anyone charged with a war crime was automatically guilty and deserving of conviction. Judge Gebelein normally presided over trials with one other international judge and one Bosnian judge. He noted that the three-judge panel was designed to make the court less vulnerable to intimidation by organized crime factions and pressure relating to local judges’ family connections.

In 2006, Attorney General-Elect Joseph R. “Beau” Biden, III, himself a colleague of Richard’s as a Major in the Judge Advocate General’s Corps in the Delaware National Guard, crossed party lines and announced that he had enlisted former Attorney General, Superior Court and International Judge, and decorated National Guard veteran Richard S. Gebelein as his Chief Deputy Attorney General. He noted:

“I am extraordinarily pleased that Judge Gebelein has agreed to serve with me,” said Biden, “He brings with him decades of experience marked by success, innovation and leadership. He is truly the best person for the job and I look forward to shaping the Department of Justice into the best law firm in the state with Judge Gebelein by my side.”

In 2009, Judge Gebelein retired from the State of Delaware and went on to serve as a legal expert on numerous long-term and short-term law reform and training projects related to judicial, ethics and discipline matters in the United States, American Samoa, Armenia, Bahrain, Bosnia and Herzegovina, Indonesia, Kosovo, Moldova, Montenegro, Mongolia, Lebanon, Liberia, Lithuania, Russia, Sri Lanka, Tanzania, and other nations funded by USAID, Department of State, the United Nations Development Project, American Bar Association, and other organizations.

Soviet Union; serving as a member of the Cambridge Institute of Criminology, Sentencing Policy Group (United Kingdom); serving as a Drug Court Expert at the Council of Europe’s Drug Court Symposium held in Strasbourg, France (2003); and serving as Chief of Party for the USAID-sponsored Justice Sector Development Project in Bosnia and Herzegovina which worked to improve the justice sector and encourage the participation of legal reform in the nation. From his Catholic upbringing, Richard felt strongly that his call to service extended to people around the world striving to build a civil society through the rule of law. Richard felt passionately about inspiring the next generation of legal minds and, thus, at various periods throughout his career, taught law classes as an Adjunct Faculty at the University of Delaware, Wilmington College, Widener University School of Law, and Rowan University.

Richard had the reputation of having a brilliant legal mind who was a tough, but never ungracious adversary in the legal arena; a politician who worked with both political parties and sought the best for people he represented. As a judge, Richard was known for being fair in his approach while applying the law. He was often seen as soft spoken – but determined, especially in pursuing areas of legal reform.

For Richard, his greatest achievement, though, was his family: his wife of 41 years, Anna T. Gebelein; his adult children, R. Zachary Gebelein, Lauren E. Gebelein, and Alexandra “Sacha” Sharkey; and his grandchildren: Zoe A. Gebelein, R. Wilder Gebelein, and Lyla V. Sharkey.

His close friends became his family and together with his family, remember Richard as a brilliant, kind, and selfless friend, father, and husband. He was a great storyteller too. A good soldier and a good man, who would do as much for those close to him as he would for people he just met. A man who sought to make the world a better place for his children, his grandchildren, and the citizens he served.

Visitation will be held on Thursday January 20 from 5-8 pm at the McCrery and Harra Funeral Home, 3924 Concord Pike, Wilmington 19803. A second visitation will be held from 11am -12noon, Friday, January 21 at Immaculate Heart of Mary Church, 4701 Weldin Rd. Wilmington 19803 where a Mass of Christian Burial will be held beginning promptly at 12 noon. Interment will be private at the Delaware Veterans Cemetery. A memorial will be set for some time in the spring of 2022. You are invited to view the funeral mass via the live stream link below on Friday January 21 at 12:00.

In memory of Richard, the family requests donations in Richard’s honor to the Nativity Preparatory School of Wilmington, DE. Donations may be sent to the school at Nativity Preparatory School, 1515 Linden Street, Wilmington, DE 19805 or via the internet to: https://nativitywilmington.org/giving/hon-richard-stephen-gebelein-memorial-endowment-fund/