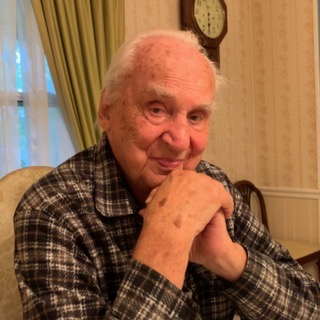 Aleksander Beresniewicz passed peacefully after breakfast, resting comfortably in a favorite chair. He was a man of the highest character and deepest personal integrity, and this world is a lesser place today for his loss.

Dr. Beresniewicz earned his PhD in Physical Chemistry from the University of Illinois in 1954. He accepted his first job offer at EI DuPont de Nemours and Company and had a distinguished career there spanning some 40 years, achieving the rank of Research Fellow.

He was granted numerous patents and made key contributions to commercially successful product lines in Electrochemicals, Polymer Products and Photo Products. He also enjoyed doing pure research during stints in the Central Research department. He was a lifelong member of the American Chemical Society and was elected into the Sigma Xi society.

As a young man Aleks had lived an “interesting life”. Born into privilege as the youngest sibling and only son of Polish/Lithuanian landowners, his youth in Lithuania was happy and relatively carefree. World War II forced the Beresniewicz family to abandon their land in the face of advancing Russian troops, and they spent several harrowing years as “displaced persons” dodging the front lines. Having ended up in Bonn, Germany at the close of the war, Aleks completed high school there. Later in life he recorded his recollections of these difficult years along with his sister Maria in a short self-published book titled “Faith, Luck, and Serendipity” of which he was quite proud.

He came to the United States to study at Marquette University in 1949, having received a scholarship for foreign students. At Marquette he met his eventual wife Irene Corcoran. They married in 1954 and settled in Wilmington after a number of years in Niagara Falls, New York.

Family life dealt Aleks significant challenges, which he met with unflinching dignity and determination. Irene’s struggles with illness meant he bore most of the parenting responsibilities for his five sons, in addition to the demands of her care and his professional career.

He was admired and loved by all who met and came to know him, and could captivate a room with stories of his early life. To be his son was to know absolute and unconditional love.

Dr. Beresniewicz was predeceased by his wife Irene (2012) and son Edward (2016) and is survived by his sons John, Alex, Richard and Mark and two grandchildren, Raina and Aleksander.

Details regarding a spring memorial service will be published in a later edition.