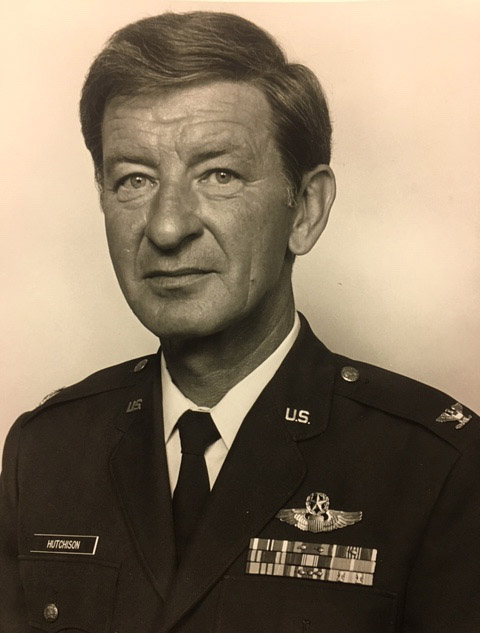 He was the son of the late William F., Sr. and Mary Hutchison of Wilmington. He served in the Delaware Air National Guard (DANG) for more than three decades and flew combat missions in the Korean and Vietnam wars. He was Air Commander of the DANG from 1972 through 1983.

Bill graduated from the University of Delaware in 1949, where he began his aviation career as a member of the ROTC. After college, he joined the Delaware Air National Guard and entered Air Force pilot training. Dispatched to Korea in 1951, he flew 87 combat missions in F-84s. He led repeated raids through intense enemy fire, often returning with holes in fuselage and wings. He was awarded the Distinguished Flying Cross, multiple air medals, and an Army Commendation Medal.

Upon return to Wilmington, Bill was named aircraft maintenance supervisor of the Air Guard, and in 1961, was selected as commander of the 142nd Air Transport Squadron, where he served until promotion to colonel and commander of the 166th Airlift Group in 1972.

During the Vietnam War, Bill flew missions into Da Nang and Tan Son Nhut airports, and while his Boeing C-97s were hit by enemy ground fire, the rugged aircraft always brought their crews safely home to New Castle.

Bill retired from the Guard in 1983 after 33 years, but he didn’t retire his wings. He flew commercial jets, stretching his total flight time to 18,000 hours in 14 different aircraft types. He worked 22 years as an instructor and examiner for FlightSafety International at New Castle Airport. His proudest moments in aviation were the hours he spent flying with his son, John Hutchison, who is now a Captain flying Gulfstream jets.

In later years, Hutchison enjoyed winters in Marco Island, FL with his wife Gerri and their children and grandchildren who visited regularly.

Friends may call Saturday, November 20 beginning at 9 am at St. Joseph’s on the Brandywine Church, 10 Old Church Rd., Wilmington, DE. A Mass of Christian Burial will follow at 10:30 am. A private burial will follow.

In lieu of flowers, the family suggests contributions to Folds of Honor, a foundation which provides scholarships to spouses and children of America’s fallen and disabled service members: www.foldsofhonor.org or Folds of Honor Foundation, Department 1‌3, Tulsa, O‌K 74‌182.