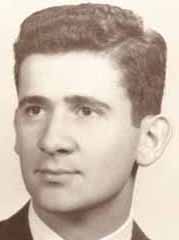 Lex Petrillo, 88, died November 10, 2021. Named for his grandfather, who immigrated to Wilmington and began Petrillo Brothers Concrete, Lex was the son of the late Denny and Carmela (“Molly”) Petrillo. Lex worked at the family business after graduating from the University of Notre Dame in 1954. He was very proud that the Delaware Memorial Bridge was made using Petrillo Bros. concrete, and of his participation in its building.

A lifelong Wilmingtonian, Lex grew up in the city. His family moved to their Edgemoor quarry while he was attending Salesianum, from where he graduated in 1950. Lex was later President of Delaware Savings and Loan in the 1970s, and finally, a commercial realtor, where he was able to fully use his gift of story telling. He also belonged to many clubs including: The University Club, where he served 2 terms as President; The Sorin Society; Catholic Charities; Sojourner’s Place; and several others. He also was a founding parishioner and lifelong member of Immaculate Heart of Mary Church in Liftwood. Lex will always be remembered for his booming voice, whether belting out a song or telling one of those aforementioned stories, and for always having a Miller Lite in hand.

He was predeceased by his wife of 47 years, Carmela (“Tookie”), and his 2 brothers, Dennis and Pasquale (“Patty”). He is survived by his children: Alex (Susan) of Wilmington; Lisa (Bob) of San Diego, CA; Jay (Jane) of Williston, VT; and Cara of Wilmington; grandchildren Alexa (Dan) Bryden; Katherine Petrillo; Drew Petrillo: Clark Scally; Chris Petrillo; and Ava Scally; 1 great-granddaughter, Sloane Bryden; and his longtime companion, Nita Holloway.

Friends are invited to his visitation at McCrery and Harra Funeral Home, 3924 Concord Pike, Wilmington, DE 19803 on Friday November 19, from 2:00-4:00pm. Burial will be private.

In lieu of flowers, the family requests donations to: Arc of Delaware or the B+ Foundation.