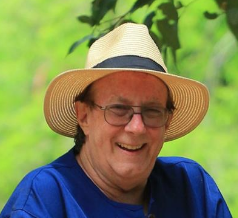 He was born in Wilmington, DE and was the son of the late F. Joseph and Mariann Poulouin. Mitchell graduated from Alexis I. DuPont High School in 1970 then earned an architectural degree from the University of Kentucky in 1979.

He worked as an architect with several firms in his younger years and explored many avenues for his artistic talents. He was self-employed as a landscape designer and master gardener, but was most known for his passion and skills in body painting. He has body painted internationally as well as at national festivals and events and was always looking for new ways to share his talent.

He is survived by his brother, Christopher Poulouin from Wilmington, sisters Terri Lokey from Ocean View, DE and Jill Matthews (Ed) from Landenberg, PA, and his nephews Peter (Rebekah), Matthew and Phillip Lokey, Connor Matthews and niece Caitlin Matthews.

A private ceremony will be held for the family at a later date.