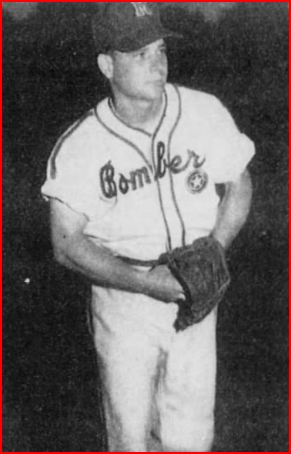 Robert Clyde ‘Cannonball’ Farmer, Softball Hall of Famer, went home to be with the Lord on September 8th at the age of 95 surrounded by his loving family.

Bob was born July 12, 1926 in Nashville, Tennessee, the third of six children born to Lela and Russell Farmer.

Bob, at a young age, went to every adult softball game in his area. He loved watching the pitchers and decided that was what he wanted to do. So he watched and practiced constantly until he taught himself how to pitch. He found a team to join and thus, it began.

Bob, known as ‘Clyde’ during his softball career, began pitching for a local team in 1941 at the age of 15 in Nashville, Tennessee.

On a trip to Delaware in 1945 Bob met his future bride, Ruth, “the most beautiful girl in the world.” The rest is history. They enjoyed a 54-year romance that produced four children.

In 1946 he went 28-2, with 500 strikeouts and nine no-hitters. He struck out 20 of 21 batters and pitched a 28-inning game in which he struck out 45 and allowed no hits until the 10th inning of the continuation game the next morning, a record that still stands.

In 1952 he struck out 20 batters in a row against the Philadelphia Metro Champs. The Tennessean newspaper named him “Best in the State.”

Al Cartwright, a nationally renowned sports editor for the Wilmington News Journal, christened him, ‘Cannonball Clyde,’ reminiscent of the lightning speed in which he shot his rise balls, curveballs, sliders, and drop pitches. Al also dubbed him ‘the no-hit guy,’ a ‘fast-ball artist’ and wrote that, “Cannonball Clyde performed the greatest pitching demonstrations ever witnessed by fans.”

The Glenn L. Martin Company, located in Middle River, Maryland (subsequent mergers created Martin Marietta and Lockheed Martin), and founded by aviation pioneer Glenn L. Martin, produced aircraft for the defense of the U.S. and its allies, especially during World War II and the Cold War. The majority of the planes built by the company were ‘Martin Bombers.’ Fittingly, Martin ‘Bombers’ was also the name of his company’s fast-pitch softball team.

A softball enthusiast, Glenn L. Martin was just another fan in the crowd during Bob’s pitching hey-day, until one day in 1953 he paid Bob a personal visit in Delaware that changed his life. He offered to relocate his family to Baltimore to work for him and pitch for his team. It was a no-brainer since Bob was a gifted technologist and a gifted ballplayer. Up until he died in 1955, Glenn L. Martin was a close personal friend and frequent visitor to the Farmer household.

In 1963 Bob was inducted into Maryland’s Fast Pitch Softball Hall of Fame for his exceptional performances and contributions to the sport that earned him the distinction as “the sport’s very best.”

In 1964 Bob moved his family back to Delaware and worked for DuPont at the Chestnut Run Textile Research Laboratory in Wilmington, in the Elastomers Department, where he contributed many innovations that earned him countless recognitions and awards.

In 2000 Bob was inducted into the Delaware Sports Museum and Hall of Fame.

He enjoyed many summers with his cherished wife, children, and grandchildren at his beloved ‘Country House,’ a home that he built nestled in the woods located in Harbeson, Delaware.

Bob loved his church and joined Union United Methodist at the age of 19. He served on the Evangelical and Administration Boards and pitched for the church’s softball team.

In addition to his parents, Bob was predeceased by his beloved wife of 54 years, Ruth; his brothers Glen, Marvin, and James; his sister Doris Forrester; and his granddaughter Lisa Jones.

Please click on the Zoom link below to join the viewing that will be Monday, September 20 from 11:30 am–12 noon, followed by the funeral. https://us02web.zoom.us/j/84736558284?pwd=SHYyZlhGdTNaRTZrMVFvWXZhRnNCZz09