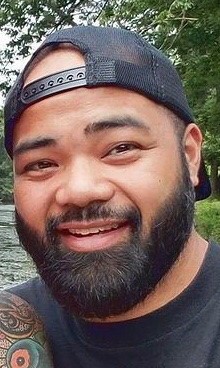 Derrick passed away unexpectedly, by his own hands, on May 29, 2021. Tragically it was the happiest time of his life, 13 days earlier he became engaged to the love of his life. He had dedicated his life to helping others by obtaining multiple counseling certifications and finally, he had successfully founded Hope in Many Forms, a 501c3 non-profit organization that uses the arts (music, the written word, poetry and visual arts) as a tool to help others in recovery from addiction, as he had successfully done for nearly 6 years.

Derrick was a force of nature, within 5 minutes of meeting him you were his friend. He had a special way of reaching people’s hearts and minds and make them know he genuinely cared about them. He was an exceptional musician (guitar), prolific song writer, singer, producer and especially performer. He lit up a stage. The world has lost a truly special man. He had so much more to give.

You always have been and always will be our hero, our hearts swell with pride.

Always leave people better than you found them

Derrick was born in the Philippines on December 28, 1985. He came to us on May 12, 1986, to complete our family. He grew up in Wilmington, Delaware and graduated from the Charter School of Wilmington (2003). He attended the University of Delaware and graduated (2008) with a degree in Interpersonal Communications. He was immensely proud of earning the rank of Eagle Scout from BSA Troop 919.

Derrick loved his family with all his being and above all else, he will be dearly missed, and his memory cherished by his fiancé, Nikki Moscoso; his parents, Lynne and Russ Hale; his brothers, Chris (Kelly), Jason; his nieces, Megan, Emily, Morgan; his nephew, Brandon; and Molly Hale. He was predeceased by his beloved grandparents, Margery “Turkey” and Gene Ezelius, and Margaret and Russell Hale; and his Aunt Ethel “Sis” Hale.

Family and friends are welcome at the McCrery & Harra Funeral Home (3710 Kirkwood Hwy. Wilmington, DE) on Thursday June 24, 2021, where a visitation will be held from 11:00 a.m. until 1:00 p.m., followed by a memorial service at 1:00 p.m. Immediately following the service, a celebration of his life will be held at the Millcreek Fire Company (3808 Kirkwood Hwy, Wilmington, DE). All are welcome.

In lieu of flowers the family requests donations be made to Hope in Many Forms (the 501c3 organization he founded) at hopeinmanyforms.org. His family and friends have dedicated themselves to keep Hope alive and thriving as his legacy.