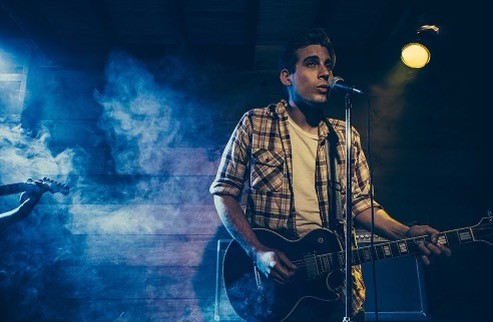 Clint was born on October 8, 1984 in Wilmington, Delaware to Gary Eastburn and Robin (Yung) Haldeman. Clint’s creative talents were evident and extraordinary early on. His love of performing and aspirations of stardom led him through many prolific achievements. From bands as a teen to his latest solo EP, his skills as a multi-instrumentalist, songwriter, producer, and vocalist rivaled those of any Hall of Fame inductee.

A love of classic country greats combined with an affinity of legendary pop artists and gypsy jazz guitar helped shape Clint’s sound and style. He honed his skills busking sidewalks and subways coast to coast while lending musical hands both in front of and behind the mic to those of us who had the pleasure of making music with him (we all know he had more raw talent in his pinky finger than any of the chart toppers of today).

With his quick wit and penchant for honest humor, Clint was also a ham who probably should’ve been an actor or even a comedian. His knack for entertaining brightened the world around him even in the darkest of times.

He is survived by his father Gary, his mother Robin, his sister Christie, his brother Nathan, his stepfather Dave, his stepmother Jessica and many aunts, uncles, cousins. He was also survived by many close friends including Sarah Muhl and Nikita Griffin who all considered him family.

A memorial graveside service will be held on Saturday March 13, 2021 at Silverbrook Cemetery (Corner of Lancaster Ave. & DuPont Rd.) in Wilmington, Delaware at 11am.