This essay was first published in Southern Calls (Sept. 2017)

Day is Done by: Todd Harra

It was a day  twelve weeks in the making. The sun was hoisting itself out of the Atlantic when I pointed the hearse toward the neoclassical bridge spanning the Potomac, Lincoln’s cenotaph at our back. Slate colored water rushed underneath the bridge’s arches, and the sprawling former estate of the Confederacy’s savior  unfolded across the rolling hills of Virginia.

I slowed while approaching the barricade, then lowered my window to allow a blast of February air into the cozy confines of the cabin. The guard on Memorial Avenue merely nodded.  He knew  what my business was today. Threading the hearse through the metal barrier, I continued toward the imposing entrance monolith, the middle niche bearing the seal of the United States. E pluribus unum.

Out of many, one.

I pulled into the designated area in front of the low slung administrative building. The drive would soon fill with professional  , all waiting for one of the thirty burial slots meted out during a normal business day. They’re drinking from a fire hose. Four hundred and fifty   vets die each day, not to mention the more recent conflicts.

“Wait here with the casket,” I instructed my colleague. He grunted, and settled into his phone, glad not to have to brave the cold .

Inside, a cheery administrator directed me toward the reserved lounge and I thanked her. There would be no need for that today. I paced the polished floors while mourners, bureaucrats, and liverymen bustled about until spying a familiar figure coming from the visitor’s lot.

“Is everything set?” Fran asked, her nervous personality heightened, not so much due to the surroundings but the situation. Here she stood on hallowed ground, not as kith and kin, but as informant. Neighbor at best.

I consulted my watch. “A few minutes more.”

At the appointed time, a cemetery representative escorted us down drives bearing the names of dead generals. The grave was nestled in the south-eastern part of the cemetery, near the Pentagon, the Air Force memorial glinting in the rear ground like giant blades of grass. An Old Guard casket team with florid cheeks waited in stillness.

Today there would be no staging area with waiting caisson. No caparisoned filly, boots turned backward in dangling stirrups, nervously prancing. No smart tattoo issued by a brass band. No color guard, flags luffing in the breeze. There wouldn’t be an escort platoon with bayonets pointed skyward and hobnails on asphalt. No, there wouldn’t be the pomp and circumstance, but today honor would be conferred.

A slight man in a collar and overcoat greeted Fran and I, his breath emerging as little puffs of smoke. “I’m Father Lopez, the chaplain. Are we all here?” He looked at the single car behind the hearse.

I opened the door, pulled the bier pin, and stepped away. The commanding sergeant issued a few sharp commands, and the casket team, in perfect unison, executed pulling the casket out and stepping it to the lowering device. Fran and I followed through rows of perfectly aligned white marble dies .

The team held the colors tautly over the casket as Father Lopez gave a brief but eloquent service. Twenty-one shots rang out and then the mournful notes of taps . The six men folded the flag smartly. Salutes were exchanged. T , leaving Fran clutching the folded flag, accepting words of condolence from an Arlington Lady.

We stood in the sunlight and biting cold for a time, staring at the casket suspended on straps. There was nothing to say. Finally, I asked, “Are you ready?” Fran took one last look, hooked her arm through mine. 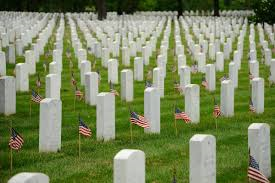 Every day I tell myself I’ve seen it all, until tomorrow rolls around. This man—a hero—was of modest rank, sergeant, but of ample valor. He earned a silver star for his courage in Vietnam. Whether by choice or by design, there were more undertakers than bereaved at his committal. But that didn’t matter. America recognized his sacrifice and stood in solidarity to commit his remains to the ground.

“Rest on embalmed and sainted dead, dear as the blood ye gave, no impious footsteps here shall tread on the herbage of your grave.”