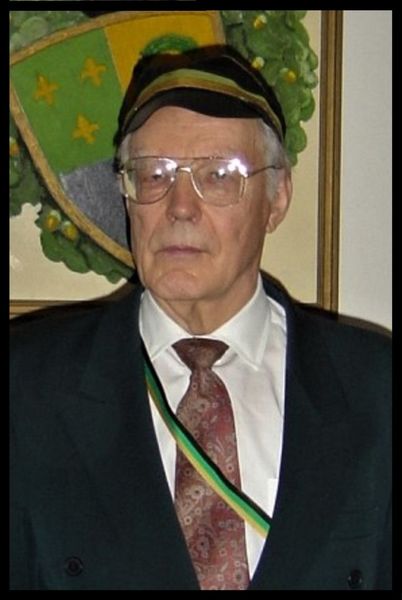 Dr. Andrejs Baidins passed away after a short battle with pancreatic cancer on November 25, 2021.

Dr. Baidins was born in Latvia in 1930, one of three children of Karlis and Marta Baidins. The threat of Soviet terror forces the family to flee and become displaced persons, DPs, as refugees were called then. After World War 2, they took refuge in displaced person camps run by the Western allies.

While at DuPont, Dr. Baidins held a research position working on pigments and TiO2 at the Experimental Station and other sites in the Delaware Valley. He is the co-holder of several patents in the field.

In July of 1960, Andrejs married Dzintra Vaivars and together had two sons, Juris and Andris (“Anci”). The couple celebrated their 61st wedding anniversary this past July.

Dr. Baidins involved himself in social and community life both professionally and socially. He was a member of the American Chemical Society, Chatham civic association president and held various positions in his church congregation. He volunteered at Camp Manito. After retirement, he headed up the Latvian retirees’ group of Philadelphia. He also advised the rebirth of his student fraternity (suppressed by the Soviet Union) in Latvia.

Andrejs enjoyed theater, classical music, reading about history, science, and science fiction. He also kept up a vegetable and flower garden. He mastered a small number of specialty cooking recipes, remarking that if he could learn to mix paints, he could also mix dough and stir soup.

Andrejs is survived by his wife, Dzintra; sister, Ilze; and his sons, as well as relatives in Latvia and Australia. He is predeceased by his brother, Valdis.

In lieu of flowers, the family would appreciate donations to the Latvian Ev. Lutheran Church of St. John, PO Box 469, Newtown Square, PA 19073.