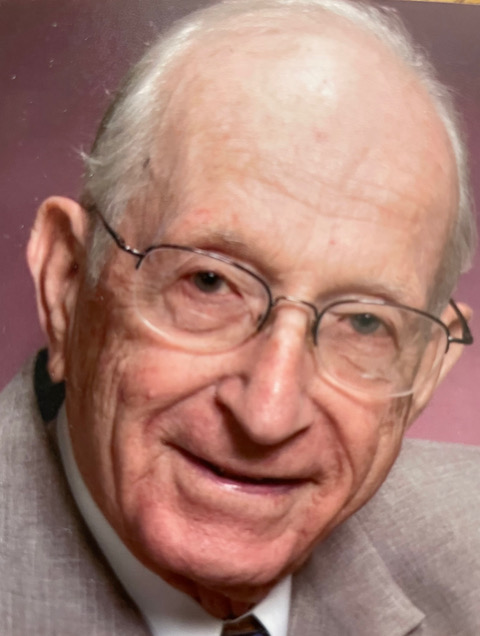 Arthur Geib, 98, died peacefully in his home surrounded by his family on November 1, 2021.

Art was born and raised in Caro, Michigan. He often joked that he peaked in high school where he was captain of the basketball team, president of the Class of 1940, and valedictorian. After earning a degree in mechanical engineering at the University of Michigan in 1944 he enlisted in the Navy. He received officer training at Princeton with the rank of Lieutenant J.G. and served in the Philippines during World War II. After the War he continued to serve in the Navy reserves for 20 years, retiring as a full Lieutenant.

After completing his active military duty, Art returned to the University of Michigan on the GI Bill where he met his wife of 71 years Norrine née Taylor while working on his MBA degree. Art’s appetite to learn was never satisfied, for example earning his private pilot’s license and becoming credentialed as a Certified Financial Advisor. He used this knowledge as a participant in two investment clubs, including one he started with his children to help them learn about investing. After earning his master’s degree, Art went to work for REO Motors in East Lansing, Michigan. He joined the DuPont Company in 1950 in Buffalo, New York, where his daughter Kathleen was born in 1952, then transferred to the DuPont plant in Columbia, Tennessee, where his son William was born in 1954. He was later transferred to Wilmington, Delaware in 1966 and remained with the company until his retirement in 1983, working as an energy consultant helping companies operate manufacturing plants with maximum efficiency, presaging today’s efforts to curb global warming. After his retirement from DuPont, he continued to serve as an energy consultant for domestic and overseas firms for several years.

Among his many varied interests, Art was an accomplished musician, playing both the piano and organ. He was the church organist at his Catholic church in Columbia, Tennessee for 15 years. In Wilmington he and Norrine were founding members of the parish of The Church of the Holy Child, serving the parish as a member of several committees including the finance committee.

Art was active in his community as well. As an eagle scout himself, Art continued his interest in Scouting as the leader of his daughter’s girl scout Mariners troop. He also co-led his grandson’s Boy Scout High Adventure sailing trip in the Florida Keys, which ended a day early due to the arrival of hurricane Andrew in August of 1992. He was a member of Toastmasters for many years and remained a lifelong active member of his college fraternity Theta Delta Chi. He founded a tradition of summertime TGIF in his neighborhood of Woodbine which often convened in his backyard with a bocce tournament. He could be seen almost daily on the tennis court all year round at the DuPont Country Club into his 90’s.

Art and Norrine had an insatiable love of travel. They took several trips overseas every year, visiting several continents and dozens of countries across the globe over the years. They combined their love of family and travel by taking their children and grandchildren on marvelous trips to many places including Mexico, the Bahamas, Bermuda and a cruise in the Caribbean, as well as the traditional annual family vacation for over 40 years in Rehoboth Beach, DE where Art joyously schooled each grandchild in the art of sandcastle construction.

Art was predeceased by his son William in 2014. He is survived by his wife Norrine, his daughter Kathleen Rogers and husband Wade, and his daughter-in-law Janet Geib. He had four grandchildren, Brian Rogers (wife Betsy Sinclair), Kelly Smith (husband Brian), Taylor Geib (wife Gabriella) and Jonathan Geib, and five great-grandchildren James, Charlie, Miles, Fletcher and Josie.