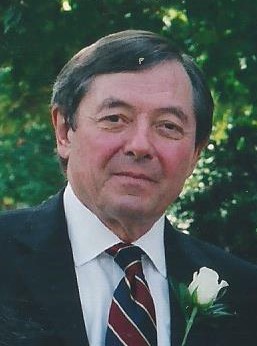 Joseph Anthony Cerceo was born in Washington, D.C., on January 12, 1938. Growing up, he lived in Washington, D.C., and in neighboring Virginia, which, although only 25 miles away, was worlds away from “the city” life. In the country, he came to own his first horse. And so, at a young age that Joe learned to ride, love, and care for horses, a passion that remained with him throughout his life as did his love of dogs, starting with his first, a German Shepard named Bing.

Growing up, Joe was boarded at military school with his brother Mike. Joe loved telling the story about how he and his older brother slipped off campus one night, undetected, and escaped only to be caught the following day and returned safely home. “Unfortunately,” the young boys were sent back to the same school, which was now on heightened alert for the possibility of runaway little boys.

Joe’s mother, Marie, was a devout Catholic who attended church every day. One of Joe’s great joys was serving as an altar boy at the small church near their home in Tyson’s Corner, Virginia. Joe’s Catholic faith remained an important part of his life and was a source of great strength to him throughout his life.

On Sundays, large family gatherings always included suppers. At the side of his paternal grandmother, Joe learned to prepare Italian meals enjoyed by all. From these experiences, Joe developed a love of cooking, another of his lifelong passions and skills. He devoured cookbooks, reading the classical chef’s works cover to cover, learning methods and techniques found in the deep recesses of these sacred books. Joe especially revered the teachings of Louis Diat and James Beard.

Joe’s father loved opera; from there, Joe developed a great love of classical music. His favorites, not surprisingly, were the classics: Don Giovanni, Mozart, Beethoven, Chopin, Bach, Scheherazade. While living in Baltimore, Joe purchased box seats in the newly constructed Myerhoff Symphony Hall where he enjoyed the performances of the Baltimore Symphony.

His love of fine art, too, leaned toward more traditional artists such as Michelangelo, Degas, and Renoir.

Joe graduated from St. John’s High School in D.C. and went to Catholic University and the University of Virginia. He was recruited as a young man, still finishing college to work on the miniaturization of components for the first rocket program. Yes, he was a rocket scientist.

More so, Joe was a true renaissance man. He mastered many talents and skills along the way. Added to his love of music and art was cooking, refinishing, and restoring furniture and antiques. Replicating the results of masters of the art was always his goal, and was indeed what he achieved as the end result. Joe managed Unidex, which provided contract services to the U.S. Post Office. Then, once again recruited, this time by Princeton and also by John’s Hopkins, he consulted in engineering physics in the Middle East for the military, where he came to love the area and the culture. Asian culture, not ignored, Joe studied Taekwondo with Jhoon Rhee where he became proficient at this art, as well.

His closest friend, Ralph Hicks of New Mexico, says that in the ‘60s all they did was work and party. He and Ralph shared a home in Georgetown (D.C.) where their parties were legendary and were attended by celebrities of the time, like the Mamas and the Papas, to name just one group. From their places in Rehoboth and Bethany Beaches, Joe and Ralph watched l the moon landing in 1969 and lots of football. Being avid Notre Dame and Redskins fans, they would celebrate games by cooking BBQ Ribs on the grill, tossing around footballs, and, as always lots of laughter.

Between consulting trips, Joe decided to create a better nutritional supplement for his dogs. He worked with an anti-inflammatory enzyme that yielded spectacular, Joe was awarded a patent for his nutritional protocol. It was his second. Also, for his work with vitamins and enzymes, he was featured on a segment of Animal Planet on the Discovery Channel. The exceptionally popular “Codi the Horse” ran for approximately 5 years. Out of no hope for an abused horse came hope and health. From the series came requests for treatment of other animals, given up on by vets. Joe had great success working with horses, dogs, cats, and even people. He treated lots of injured limbs in horses; he created a separate vitamin/mineral formula which helped several horses who had trouble carrying their babies to term, finally deliver strong, healthy foals. He treated bone cancers and carcinomas in dogs and lymphomas in cats, all with great success. He was responsible for bringing his wife back to health when rampant inflammation threatened her life and when even IV antibiotics failed to help.

As a result of his connections in the Middle East and his interest in creating a healthy supplement for his animals, Joe acquired and bred a number of racehorses, all of which he raced without the benefit of performance-enhancing drugs, something all too common in the industry. His horses all ran, too, without the benefit of Lasix, which he disdained due to its unfortunate side effect of flushing nutrients from the system. Joe also aimed to prove that if provided proper nutriture, an otherwise ordinary horse could yield extraordinary results. And they did.

Before marrying Suzan and moving to Elkton, MD then Wilmington, Joe also resided in Walkersville, MD and Lebanon, PA.

Joe is survived by his younger brother, Ed, who lives in West Virginia; his wife, Suzan (nee Atadan); Suzan’s daughter, Jennifer Barnes and her husband, James Crouse III, of NYC; numerous relatives of Suzan, including Denis, David and his wife Janice, Selma and her husband Dennis; plus Warqar-Lammont, Jarbe, and Sandy. He joins his previous wife Susan Stanson, in Heaven along with his family and extended family of horses and dogs.

We miss Joe tremendously. He left us quite a legacy and path to follow.

A Mass of Christian Burial will be celebrated at St. Joseph on the Brandywine Church. At 10 Old Church Rd. Greenville, DE 19807 on Friday, September 24 at 10:30 a.m. Friends and family may call beginning at 9:30 a.m. Committal services will be private.