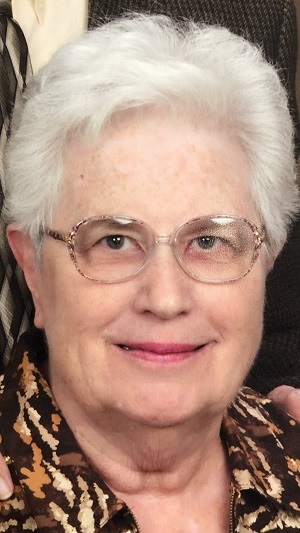 Margaret Coulter McConemy (Peggy) of Lima Estates in Media, PA (formerly of Wilmington, DE) passed away on August 20 following a courageous eight-year struggle with breast cancer. She was 87 years old.

Peggy was predeceased by her husband of 63 years, Raymond L. McConemy. She will be greatly missed by her daughters Margaret (James) O’Boyle of Wilmington, DE and Linda (Peter) Fielding of Mechanicsville VA, her grandchildren Patrick O’Boyle, Ryan O’Boyle, and Kate Fielding, as well as other family members and her friends at Lima Estates.

Peggy was the daughter of Robert and Margaret Coulter. She was born in Philadelphia, PA in 1933 and, although she was an only child, Peg grew up around a large, extended family which included many aunts, uncles, and cousins with whom she remained close for her entire life. Peggy graduated from Frankford High School in 1951, then met and married her beloved husband Raymond in 1956. Peggy and Ray would remain deeply devoted to each other for the remainder of their lives.

Family would always remain very important to Peggy. She reveled in spending time with her husband, daughters, their husbands, and her grandchildren. Peggy also derived much satisfaction from her 25-year career working as a financial secretary in Food Service for the Brandywine School District. She enjoyed cooking, playing bridge several times a week, needling directory covers for the residents at Lima Estates, and spending time with her friends. She was extremely generous and very supportive of everyone that she met.

Her unwavering belief in God and his teachings and her enjoyment of fellowship were always a fundamental part of Peggy’s life. She attended church regularly and was most recently a member of Lima United Methodist Church. No matter what she was going through, Peggy always knew that the Lord was by her side, holding her hand and giving her strength and comfort.

Peggy’s family would like to thank the caring staff at Willow Brooke Court and Oak Bridge Terrace at Lima Estates, as well as the ACTS Community Hospice staff for helping to make her transition as peaceful and comfortable as possible.