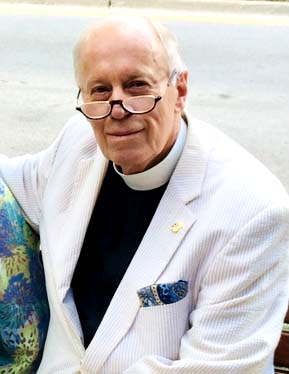 He was born January 2, 1944 in St. Boniface, Manitoba, son of the late Harry Walberg and Reita Gunn. He is survived by his wife Catherine, daughter Katherine Lowry, Saskatchewan, and stepdaughter, Sue Whiteside, Maryland.

He taught history at several universities in Canada and the U.S. While teaching he also held numerous executive positions in Canadian business ventures including President, The Falcon Group and Senior Vice President, Gold Lake Mines, Inc.

In 1984 he found his true calling, becoming a priest in the Anglican Church after receiving a certificate in Theological Studies from Holyrood Seminary (NY). Fr. Ken served as rector and Priest-in-Charge for St. Thomas of Canterbury Anglican Church, Philipsburg, PA; St. Alban’s Anglican Church, State College, PA; Anglican Church of the Good Shepherd, Cuba, NY; and St. Mary’s Anglican Church, Wilmington, DE (2002-present). He was devoted to his faith and guiding and supporting his parishioners along the way.

He had a vast interest in history, politics, and international affairs and was often an invited speaker at foreign policy organizations around the world. Over the years he presented papers in London, Yugoslavia, Toronto, Sweden, and at the US State Department.

As a Canadian citizen, he was respectful of monarchies and even attended a Queen’s garden party at Buckingham Palace. He was the Eastern States rep to the International Council of the Monarchist League, which led to friendships with the former King Kigeli of Rwanda and Prince Kardam Saxe-Coburg-Gotha of Bulgaria.

Wherever he lived he was an officer or member of many community groups including most recently the English-Speaking Union, Swedish Colonial Society, the Fellowship of Concerned Churchmen, the Conservative Caucus of Delaware, and the Anglican Guild of Scholars.

He was a leader in the Afghan and Delaware Citizens Together group which raised money to build a girl’s school in Afghanistan. One of his most unique experiences was participation in a peace delegation to Baghdad before the second Iraq war, flying into Iraq on the first commercial flight from the West in a decade.

He enjoyed curling, playing and watching golf, tennis, and going to many social events.

An Anglican Mass to honor him will be held at 1pm on Thursday, August 26, 2021 at St. Mary’s Anglican Church, 4201 Washington St. Wilmington, DE 19802. The family request that those attending wear a mask.

In lieu of flowers, charitable donations can be made to St. Mary’s Anglican Church in Wilmington, DE or the American Heart Association.