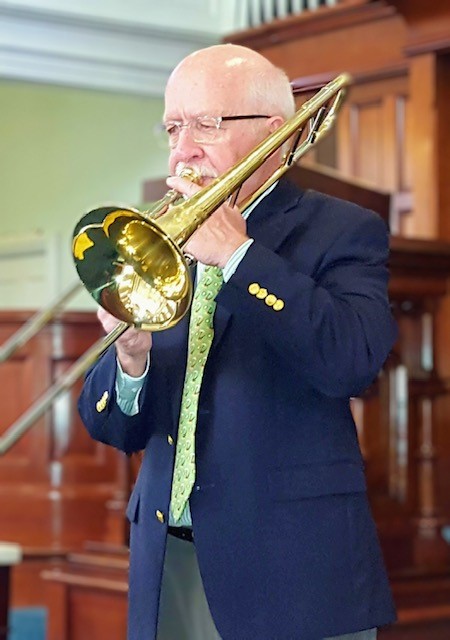 The Reverend Thomas J. McKinnon, Jr. HR (PCUSA) age 73, a resident of Green Ridge Village, Newville, PA, formerly of Wilmington, DE, died at home on Saturday, January 2, 2021. He was born in Wilmington, on September 19, 1947, the son of the late Thomas J. McKinnon Sr. and Evelyn W. McKinnon. He was formerly a member of First & Central Presbyterian Church, Wilmington.

A 1965 graduate of Brandywine High School, Wilmington, DE and West Chester University, 1969, Tom served as a trombonist in the Delaware National Guard Band. For 9 years he was a general music teacher in grades 6 through 8, directed chorale music and coached a baseball team in the New Castle (DE) School District. During this time, Tom was also a professional trombonist playing with well-known big band artists and bands in DE, NJ, MD, Philadelphia, PA, and New York City.

In 1979 Tom left teaching to attend Pittsburg Theological Seminary, PCUSA, where at graduation he was awarded a coveted prize in homiletics. Ordained in 1982, he was called as an Associate Pastor to the First Presbyterian Church in Plattsburgh, NY, where he directed youth activities and served as a counselor. During his 11-and-a-half-year tenure there, in addition to Pastoral duties, Tom lead youth mission tours, was a member of the Mental Health Board of Clinton County, NY and served on the Institutional Review Board of the Champlain Valley Physicians Hospital Medical Center in Plattsburgh. He was a leader in refugee resettlement, a representative on the Inter Faith Council, and chaired the local food bank for 6 years.

In 1994, Tom was called as Pastor to the Donegal Presbyterian Church, an historic church in Mount Joy, Lancaster County, PA. He was elected Moderator of the Donegal Presbytery in 1999. During his 22-year ministry in PA, he also chaired numerous other Presbytery committees. Tom helped initiate and supervise the building of an architect designed addition to the historic Donegal Church building that included a new kitchen, board room, an elevator and worship space overlooking the Donegal Spring. For 17 years he led young people and adults on mission tours to St. Lawrence County, NY, participating in home rehabs as part of the “Mission in the North Country.”

Retiring in 2015, Tom moved to Green Ridge Village in 2016. Active in that community, he chaired the Library Board, was a member of the Independent Living Executive Council, served as a Village Ambassador, and sang with the Village Aires. In retirement Tom began to play the trombone again. He performed with 9 different bands in Carlisle, Shippensburg, Gettysburg, and York. He soloed with the Brandywine Blazers Reunion Band in Wilmington, DE, and recorded a CD (not yet released). He was also a guest preacher at Presbyterian churches in Carlisle, Chambersburg, Mechanicsburg, Newville, Wrightsville (York County), and Plattsburgh, NY. Tom was the Pastor Emeritus at the Donegal Presbyterian Church, Mount Joy, PA.