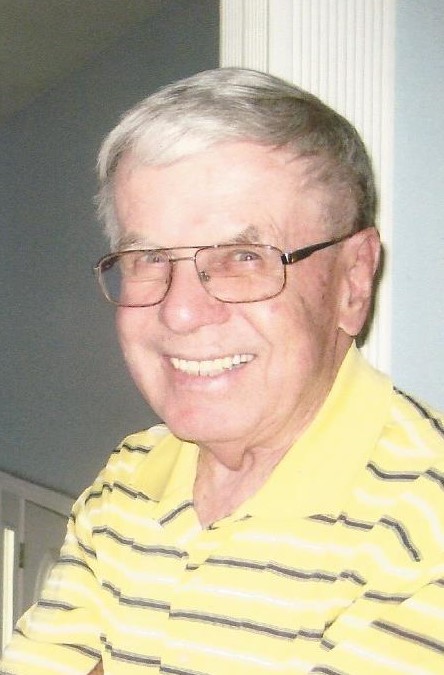 James Hirst, age 86, of Wilmington, DE, died peacefully on Nov. 3. He was surrounded by his family and accompanied by an amazing sunset.

Jim was born in the Forty Acres neighborhood of Wilmington, DE. Despite being a premature baby of 2 pounds in the 1930’s and an adult who barely passed 5 feet in height, Jim embarked upon a lifetime of activity and competition as soon as he began to walk. He spent much of his childhood stomping around the Forty Acres neighborhood and Brandywine Park. He played basketball at the P.S. DuPont High School and spent many hours at the Governor Printz Roller Skating Rink.

He joined the military near the end of the Korean War and learned the art of teletyping. Upon dismissal from the military he used these skills at DuPont and began a career of over 40 years with the company. Despite having no college education, he worked his way up to become a Telecommunications Engineer and was a DuPont “lifer”.

Jim spotted a gal named Shirley in a learn-to-skate class at the Governor Printz Roller Rink in 1958. He asked her to skate several waltzes with him; she turned him down repeatedly. Eventually she gave in and they ended up married. For 60 years they enjoyed the company of one another, their four children, eight grandchildren, and great granddaughter.

Having met at the roller skating rink, skating was a central part of their young family’s life. In Jim’s youth he competed in figures, dance, and speed events. Once his own children arrived, he coached the speed skating team and all of his children competed from very young ages. Jim was a second father to many local kids and young adults who were interested in speed skating. He encouraged each and every one of them to try their absolute hardest and to be good sports. He traveled across the country for many speed skating events including a yearly trip to Nationals, which generally took place in Nebraska.

After his coaching days, Jim seamlessly entered a new phase of an activity-filled life. He golfed. He bowled in several leagues with his wife and sons. He played horseshoes competitively and competed in the Senior Olympics. He took up square dancing with Shirley and the two of them attended many local events. He joined the Newark Senior Center and participated in card games and billiards. He was a busy man!

Jim was extremely proud of his family and relished in all of their accomplishments. He never missed a game, show, or graduation. He traveled across the country to watch a granddaughter bowl competitively, he traveled to Maine to watch another granddaughter dance, and he always showed up for any birthday. He loved a crowd and loved playing all sorts of games (mostly cards!) with his family. It should be noted that he NEVER let any children win, no matter their age! During the last few years he began an extra outpouring of love upon all of the family. We are left knowing we were led by an amazing man who loved each and every one of us fiercely.

The family wishes to express heartfelt thanks to the Christiana Hospital Neurological Unit for their loving care of our husband/Dad/Pop Pop during his final days and for their patience with his family.

A public visitation will be held on Saturday, November 7, 2020 at the McCrery & Harra Funeral Home on Kirkwood Highway in Wilmington, DE from 1:45 PM - 3:00 PM. Face masks will be required. As we are in the midst of a pandemic, please know that your presence will be felt whether you are in attendance or not.