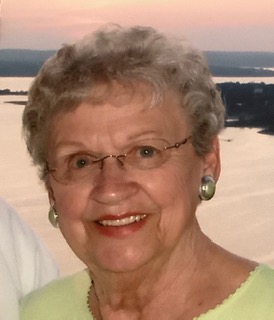 Jean grew up in Wilmington, Del., the youngest of four sisters. She graduated from P.S. Dupont High School before marrying the love of her life, Leslie, in 1946. They had two children and were married for 43 years.

Jean worked as a homemaker and secretary for many years before retiring from the Red Clay School District in 1987. She sang alto in her school and church choirs from her teenage years and well into adulthood, and music would continue to bring Jean great joy throughout her life, as she could often be found dancing the jitterbug on Friday nights at the beach or humming along – in harmony – with any music playing anywhere at any time. Her favorite hymn was “Amazing Grace.”

Jean was most proud of her family and enjoyed many memory-filled summers watching her children and grandchildren waterski and catch crabs in Indian River Bay – and she has the photo albums to prove it. She was an independent, resourceful woman, known to fix most things around her house with a bungee cord or duct tape, often celebrating her achievements with a daily crossword and evening Manhattan.

Due to current COVID-19 considerations, the family will hold a private service this week and will host a public celebration of Jean’s life at a later time.