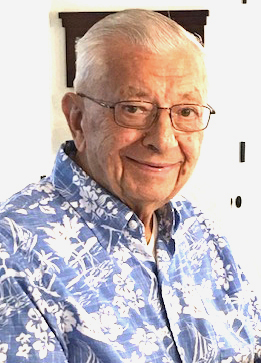 John J. Trudnak, 93, of Wilmington, DE., passed away peacefully on Tuesday, June 23, 2020, at his home surrounded by his loving family. He was born in Wilkes-Barre, PA, son of the late Michael and Veronica (Sebolka) Trudnak,and graduated from King’s College (Wilkes-Barre) in 1956. Jack served in the U.S. Army during the Korean Conflict. He was Honorably Discharged in 1952. Upon graduation from King’s College, Jack began his career with the DuPont Company in Wilmington as a Business Analyst and retired after 30 years of service.

Jack began his second career as an Accountant working part-time at Delaware Technical Community College for an additional 25 years before “retiring” again. Jack had a devout dedication to his family, friends and church (St. Mary Magdalen). His favorite prayer or toast said at many family gatherings was “F&F…H&H”, which means Family & Friends, Health & Happiness. He enjoyed his garden, spending family vacations down the Jersey Shore (Avalon, NJ), and would never pass up the opportunity for a party with his family and friends. He was often viewed as the life of the party. In addition to his parents, he was preceded in death by his wife, Mary, and two brothers, Michael and Ervin Trudnak. Jack is survived by his children, Karen Karch and her husband, Wayne, Wilmington, DE.; John J. Trudnak Jr. and his wife, Maureen, North Easton, MA; Jane Szulinski and her husband, Mike, Wayne, PA; and Mary Beth Transue, Wilmington, DE; seven grandchildren, Craig, Jake, Lauren, Taylor, Jill, Jennifer and Mary; two great-grandsons, Cole and Mason. He is also survived by his sister, Marie Stroney, Clarks Summit, PA and brother, Joseph, Wilkes-Barre, PA; and many nieces and nephews.

The family would like to extend their appreciation to the staff of Seasons Hospice & Palliative Care for their compassionate care and support, with special thanks to his caregivers Pascale and Julianne! Due to the pandemic, the burial services were private. A Celebration of Life Mass for Jack will be held on Saturday, October 10th at 11:00 am at St. Mary Magdalen Church, 7 Sharpley Rd, Wilmington, DE 19803. In lieu of flowers, contributions can be made to Seasons Hospice & Palliative Care, 220 Continental DR, Unit 407, Newark, DE 19713.