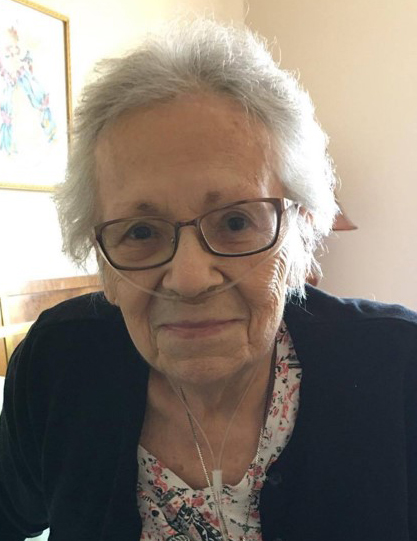 Dolores Marie Grippo, of Glen Mills, Pennsylvania, passed away on Wednesday, August 5, 2020, at the age of 86. After several years of declining health, Dolores died peacefully in her sleep.

Dolores was born in Bronx, New York on May 23, 1934, to father Albert Mirra and mother Adeline Mirra. Dolores’s father was a butcher and small business owner, and the family was comparatively well off. During her childhood, her family owned the only private automobile in the neighborhood. Dolores showed an aptitude for singing, dancing, and guitar playing at an early age. When she turned 16, she caught the eye of two talent promoters who wanted to bring her to the Catskills to perform during the summer. Her mother disapproved, ending her professional musical career. Dolores continued to sing and perform in community theatre, and she played the guitar as a hobby for many years.

Dolores graduated from high school in the Bronx in 1953 and started working as a book keeper for various firms in Manhattan. She spent several years working for the publisher of American Heritage Magazine. In 1958, she met New York City firefighter Clarence Grippo, and they were married in 1959. They lived in Emerson, NJ for 25 years where they raised a family and enjoyed the company of many friends and relatives. In 1980, Dolores resumed her education, and in 1984, she received an Associate of Arts with Honors degree from Edward Williams College and in 1988, she received a Bachelor of Science degree in the discipline of Accounting from Farleigh Dickinson University. For many years, she worked as an accounts receivable manager for firms in northern NJ, including Butler Aviation and The Bergen Evening Record. Based on her achievements, Dolores became the lead income provider in the household.

Dolores was also an expert tailor and thrilled her children and grandchildren by sewing them Halloween costume creations. She often made her own clothes to include professional quality formal wear and beaded purses.

Some of Dolores fondest memories were her outings with her children at the Bronx Zoo. In lieu of flowers, the family asks that donations be made to the Wildlife Conservation Society of Bronx New York. Please make your donations on-line at https://www.wcs.org. Click on Donate Now.