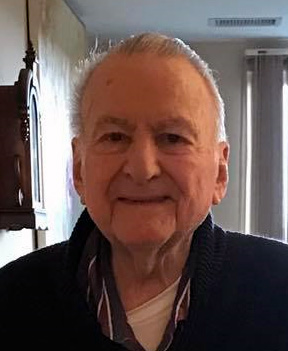 Clarence Francesco Grippo of Glen Mills, Pennsylvania passed away on Tuesday, July 21, 2020, at the age of 90. After several years of declining health, Clarence died peacefully in his sleep with his beloved wife Dolores by his side.

Clarence was born in Manhattan New York on October 7, 1929, to father Rosario Grippo and mother Sarah Davidovitz. The family faced many hardships during the Great Depression. After the death of his younger brother Salvatore at the age of 2 and the isolation of his father in a tuberculosis sanatorium, Clarence spent several years in orphanages and foster care in New York City. During his stay in these “homes,” he developed a life-long dislike of oatmeal, peanut butter, and corn flakes, foods frequently served there. Upon the release of Clarence’s father from the sanatorium, the family was reunited until Clarence enlisted in the Army at age 17. He served as a medic aboard troop transport ships and tended to wounded soldiers returning to the United States.

Upon his discharge from the Army in 1948, Clarence used his G.I. Bill benefits to complete his high school diploma. He then headed to Los Angeles, California, where he found work in the industrial sector, including a job as a riveter with North American Aviation. He achieved some renown on the job through his art work that decorated the side of aircraft. He returned to New York City in 1957 and joined the New York City Fire Department and served with distinction as a firefighter until 1986. After his arrival in New York, he met Dolores Marie Mirra of the Bronx, and they married in 1959. They spent 25 years living in Emerson, NJ where Clarence was an active member of the Emerson Volunteer Ambulance Corps.

Clarence was preceded in death by his parents and by his brothers, Salvatore Grippo and Shimon Kutchera and by his sister, Margaret White. He is survived by his wife, Dolores Marie Grippo; children, Lawrence Grippo (wife Juliette) and Kenneth Grippo (wife Mary Jo) and his grandchildren, Zoe Claire Grippo and Julian Paul Grippo.

People wishing to honor Clarence’s service to the community can make donations to Children’s Aid of New York City. Please make your donations on-line at donate.childrensaidnyc.org. Scroll down to the bottom of the site, look for “Honoree Information”, check the box “Yes, this is an honor or memorial gift” and select “In Memory of” in the “Honor Gift Type” section